If you have your eye on rare playing cards, then you want something special. Something with actual meaning…and preferably a deck or two that no one else has ever seen before. …Or maybe you just want to look at them if a purchase isn’t really possible. We get it – and that’s why we’re helping out with a quick list of the top five rare luxury playing cards, and just what makes them so special. Check out each deck to find your favorite!

Another David Blaine story about a very different kind of deck! The black and gold deck was created specifically for Blaine and was sold briefly on his site – selling out almost immediately with no plans to make more. The design is a mix of pirate-like skull & bones symbols, along with more nightmarish and occult imagery. We’re not saying it’s perfect for Halloween, but…it is. The VIP version here is even rarer!

Feel like dabbling in a little alchemy? The Heretic Noctis deck is a tribute to the forbidden arts, featuring real-life arcana symbols, patterns treasured by alchemists, important sigils, and magical constellations! But that’s just the start: The deck also celebrates alchemy by using the traditional symbol of salt for the Jacks, Sulfur for the Queens, and Mercury for the Kings.

The Noctis version of this set is a special limited edition with even more enhanced features and easily our favorite look – if you can find it. Be careful, though: There’s no telling what you’ll summon playing with this deck.

Encarded released this deck as a very special, very limited run designed by Paul Carpenter. The memorizing, mandala-like design carries on throughout the deck, rich in detail and color. Only 1,000 of these decks were ever printed, which means if you can find one available it’s bound to be expensive – and highly sought after.

Some of the best rare playing cards in the world have an important history behind them, and this deck involves a most excellent story: Back in 2014, Microsoft has just finished hosting some of the most talented interns in the world, and – as was custom – wanted to send them off with a bang (and hopefully convince the best to come work for the company in 2015). So, they hired David Blaine to put on a special performance and as part of that performance they gifted a deck to each intern.

The deck itself, with artwork by Mark Stutzman, celebrates Microsoft’s keen technological edge with just a dash of magic. The original print run included only 2,015 as part of the commemoration of the event, and no other decks were ever produced. Finding one of these in the wild is very difficult, so there are currently no plans to put any of the decks on sale.

These astonishing cards were made as a gift for select customers at a 2018 Franck Muller trade show. Muller’s specialty is incredible watches and other timepieces, and these cards symbolize that with fascinating clock hands combined with Vegas designs. They were never sold, and it’s nearly impossible to find one of these decks today (and not exactly easy to play with one, either). 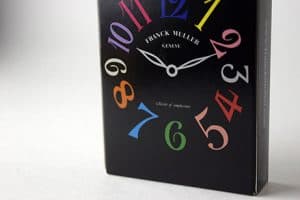 Contact us today at custom-orders@expertplayingcard.com or 212.629.4702 and we will help you create custom playing cards with all the premium features and foils!